The question of historicity of Aryan Invasion Theory is coming up too frequently and too many questions are being raised over the historicity of the theory. Below details are from a discussion I recently had over the same.

So, where shall we start over this? Let me take up the discussion under the premise that Aryan Invasion happened. This raises a few questions.

1. Who are those people who migrated from the Central Asian Steppes, just North of Caspian? Where did they come from?

The last ice age, Younger Dryas was over some 11500 years ago. Most of Europe and Asia, with the prominent exception of India was under a thick sheet of ice and it was not conducive enough for a large population. Only after the ice started melting, humanity spread into those areas. There may have been some in those areas before, but the reality is, the numbers are not sufficient enough for a large scale settlement, both due to the paucity of resources and the climatic conditions. Now, the question is, is it possible that those people left India to settle there? Or did they go from somewhere else to settle there?

2. What was happening in the areas which are not under ice sheets?

Hindu scriptures talk of Bhageeratha Prayatnam – bringing of divine Ganga to the earth. Or, can it be simply interpreted as the breaking of a glacier and an uncontrollable torrent of water which calmed down somehow? There is already a mighty river, Saraswati around which a civilization is built. Whether it is linked to Ganga’s birth or due to some other incident, we see that two of the most important tributaries of Saraswati – Sutlej and Yamuna change course – one moving towards Indus and the other towards Ganga. Saraswati slowly started to dry up and the people migrated inwards. Or is it in both the directions?

Notice the below two references.

So, here, we have two possibilities of Indians populating the steppes – once after the Younger Dryas and the second time, when Krishna Yajur Veda was being compiled.

So, now, the question becomes who are these people who populated Central Asia instead of did they invade India and topple the existing civilization.

3. Were there any contemporary civilizations to Harappa Civilization?
We know of Ahar Culture, Narmada Valley, Painted Greyware, a primitive culture involving people living in underground burrows in Kashmir. We know for sure that Ahar and IVC interacted with each other and possibly the other civilizations.

4. If there is an invasion, it involves a massive show of force sufficient enough to topple the culture completely. Did this happen only for IVC or for other cultures? If they are, how far did the invasion persist? And if they aren’t how did the other civilizations address the loss of trade? Is it visible in the quality of products from the digs in their area?

So, what is this Aryan Invasion Theory all about?

Aryan Invasion Theory is a theoretical model which explains how India came to what it is. It says that a Central Asian pastoral community called Aryans spread out of Central Asia and one of the main branches toppled the existing civilization in India and took it’s place. Based on this, it is postulated that the Aryans spoke in a language which spread all over the area along with them, and with language families like Dravidian and Mundari being remnants of the older inhabitants of the area. Two major facts stated in support of Aryan Invasion Theory is the word Purandara – destroyer of cities and the use of horse. Purandara is one of the names of the primary god of Aryans – Indra. Because he destroyed cities, it is postulated that Aryans didn’t have any cities. But, Rig Veda talks of Indra’s capital city and other cities. As to horses. The discovery of Sivalik Horse should discount the debate over fast moving cavalry which decimated IVC.

One of the fundamental premises of Aryan Invasion Theory, codified as Mallory’s Exclusion Principle codifies the whole Aryan Invasion Debate. It simply states, Aryan homeland is where there is no other civilization. 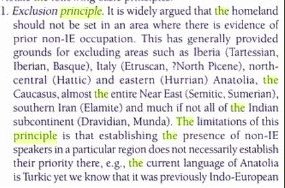 What comes out of this is, something which is supposed to be proven becomes a pre-condition. Where do we stand on this issue, then?

There are a few issues with this argument.
1. How many cases do we have, where a pastoral nomadic community supplant a sedentary agricultural and urban civilization?
2. The spread of Aryans is exactly identical to the Turkic Migrations out of Central Asia. Is it possible that the AIT was modelled upon Turkic migrations? Note that Turkic migrations happened due to Xiongnu pressure. What was the trigger point for Aryan Migration?
3. Below is the postulated spread of Aryans based on the spread of the supposed mother language, Proto Indo European.

a. One wave towards Tocharia somewhere in Manchurian area
b. One was towards Greece, which split into Germania and Balkans, going through Europe
c. Another, same area, but through the Caucus
d. One towards India
This raises a few questions.

4. This horse based conquest of Harappa, isn’t it eerily similar to the conquest of Americas? Is it possible that someone applied the American invasion model in Aryan case?
5. If PIE spread all over Asia and Europe, it shouldn’t be tough for us to trace the flow of phonetics. अग्निमीळे पुरोहितं यज्ञस्य देवमृत्विजम् is the first line of Rig Veda. Is it possible to establish the flow of the characters ळ, ऋ through the Aryan Migration routes? Also to note is that ळ is present in Gujarati, which links it directly to IVC geography, which can raise other possibilities.
6. If Aryans are such powerful pastoralists, what exactly happened because of which Aryans were booted out of their homelands and replaced by Uralic language people?
7. What is the literary output of the other Aryan branches? Or, are we saying, Indian branch is the only one which composed some literature?
8. Bows and arrows are painted on 30,000 year old Bhimbetka caves of central India, but Indo European languages other than Indian and Greek have no words for bows and arrows. How does this fit into the grander picture of spread of language and technology?
9. Another hypothesis is that Aryans split into two branches, one veered off towards Iran and another India. Iranian Avestan and Indian Sanskrit are very close languages and both the entities have similar cultures. Paraphrasing,
“However, there are no ancient Zoroastrian texts that refer to their language as “Avestan” In fact no one knew of any original Zoroastrian language of any name, be it Avestan or any other name. In the late 1700s a man called Anquetil du Perron came to India and lived for a few months with Parsi priests in Surat, who taught him what they knew of Zoroastrian chants (gathas) and rituals. Perron also collected some Zoroastrian texts and returned to Europe where he wrote a book in French called “Zend Avesta – Ouvrage du Zoroaster” meaning “Zend Avesta – the work of Zoroaster”. Perron’s work was initially dismissed but 60 years later it was validated and corrected by a man called Eugene Burnouf. To make the corrections Burnouf used a 13th century Sanskrit book by an Indian called Neryosangh Dhaval. That book was a Sanskrit translation of a Pahlavi language version of Zoroastrian holy texts. So whatever is written about the 3000 plus year old “Zend Avesta” is derived from verbal accounts of 17th century Parsi scholars, contemporary texts and a 13th century book that was written in Pahlavi language and translated to Sanskrit. A 3000 year gap between the original language and the translation does not inspire confidence about the linguistic theories regarding the identity of the original Zoroastrian language. And since the main source of reconstruction was from a 1300 AD Sanskrit text they ended up with a language that sounded somewhat like Sanskrit but had some differences such as the sound “sa” being replaced by the sound “ha” and some other changes. Linguists called this language Avestan; claimed that it was spoken 3000 years ago by Zoroastrians and made up a story of how a mother language came from somewhere and split into Avestan that went to Iran and Sanskrit that developed in India”
10. When you place the homeland of Aryans just above the Sumerian civilization, what level of lexical dependence is identified between both the cultures? Anatolian route through the Balkan coast of Black Sea will surely cross the Armenian route of Greek. What do we know of the cross-interactions? Also to note is that the Aryans destroyed IVC when they came across it but didn’t touch Sumerian Civilization when they came across it.
11. Let me try to put this into a contemporary frame of thought. Why do people flock to London or New York today? Because of job opportunities. Is it possible that the Central Asian nomads migrate towards Harappa and so, for menial jobs, which was confused as a mass migration which destroyed the civilization? Also, if you do an excavation in Ilford in London after 1000 years, you will be seeing only Pakistani skeletons. Will you infer that England is a Pakistani city conquered by Caucasoids? After all, cities grew through migrations. However, in the case of AIT, migrating when the economy is flagging makes no sense whatsoever as this times with the global drought of that age. Also to note is the fact that, if this is a migration in place of an invasion, what examples have we got of older civilization collapsing because of migrations, migrations into city states, not closely knit entities like Roman Empire

1. Steppe_EMBA samples have no R or R1a Y-chromosome DNA markers. But they suddenly appear in later samples, Steppe_MLBA and Steppe_LBA, indicating these arrive to the Steppe from somewhere else. Previously it is known that the predominant Indian R1a, R1a-Z93, is different from the European R1a. During the last ice age (about 18,000 years ago), the northern latitudes were all severely cold and bone dry and humans went extinct. This ice age (last glacial maximum, LGM) ended about 13,000 years ago. So if R1a originated in 22,000 and 25,000 years ago, and has survived the ice age, it could have survived only in the tropical Africa, India and South East Asia. It is well known that the R1a lineages are found only in India and Eurasia north and west of India. It is present in East Africa from migration from India.
2. With the aid of Panini’s systematic grammar, an English judge in India Sir William Jones announced in Calcutta-that Sanskrit, Greek and Latin “have sprung from some common source which, perhaps, no longer exists.” This was the seed from which sprang Indo-European comparative grammar, the branch of linguistics that sets forth in all detail the relationship posited by Jones (Emeneau M).

The real question in all this is, when black and white are treated as good and evil in every civilization in the world, why did it become two skin colours and consequently, two races in India? Why did white triumphing over black become white skinned people subjugating black skinned people and not good winning over bad?